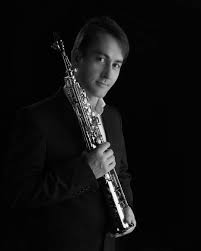 The title of the work is intended to suggest the rapid, free-flowing and often highly chromatic melodies played by the saxophone soloist. The title also reveals something of the inspiration behind the music and my current fascination with all things nautical.

Flying Colours commences with music of a bright and vigorous nature. The strong pulse heard at the introduction is maintained and serves to drive the narrative of the whole work. Weaving in and around the band / piano part, the soloist’s florid melodic lines are composed of ordered, balanced phrases. This is in keeping with the ‘crazy logic’ style of some of my previous works for saxophone in which ‘crazy’ melodic intervals are shaped into ‘logical’ or symmetrical sentences.

Some of the Known Performances

If you would like more information about this score, feel free to email me.
I look forward to hearing from you!

Flying Colours (for alto saxophone and band)
is available on the US Navy Band’s “Derivations” CD.

To get your copy, try these links:

Plus other iTunes stores: type “Derivations, US Navy” into the iTunes Store search field.

Also available at these links: